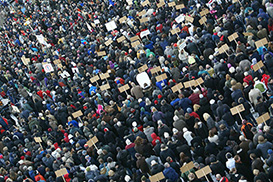 Social orders are never stable. The are permanently changing, without following a linear development path. These processes of change are driven by social conflicts in which collective actors question and contest the existing order. Social conflicts are thus at the center of social change.

Existing orders are questioned within the established political institutions and structures of interest representation, through electoral competition and by organized interests. But more importantly, it is protests and social movements that drive social change. Thus, social conflicts are always characterized by specific interactions between institutionalized and non-institutionalized actors. These interactions are at the center of the working group's research program.