Political Theory of the Welfare State 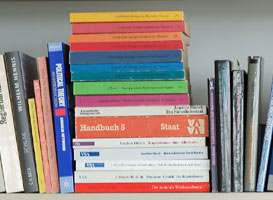 Values such as liberty, equality, justice, solidarity and subsidiarity have determined social policy for many years. National variation in the core categories of welfare state justification is observed to be more striking than before. Particular attention has to be paid to the terms ownership and sustainability, recently found in public discourse. With certain normative concepts such as the activating state the focus turns towards with a more guiding and protective welfare state. The changes in the value oriented conceptualities and the shifts in the interpretation and explanation of traditional categories (e.g. the shift from social justice to intergenerational equity) require both a discourse analysis and an assessment against the background of the established concepts of normative political theory. The state of a normative theory of the welfare state can still not be considered advanced, and it is a special subject of research in our department.

Our research is based on the assumption that the integration of Western democracies depends to a large extent on the creditworthiness of their legitimation.

Empirical analysis of the relevance of welfare state legitimacy and political acceptability and legitimacy conflicts to social policies were carried out in close connection with the Collaborative Research Center existing from 2003 to 2014 (for more details see Legitimating Nation States, International Regimes, and Economic Orders). The crisis of the welfare state could be expanded, under certain conditions, to the crisis of the democratic political system. Studies undertaken here attend to the analysis of publicly communicated patterns of legitimation.

In the course of further research, key terms found in recent debate of the social state, such as intergenerational equity and personal responsibility will be analyzed in various ways. These complementary strategies include disambiguation, evaluation of the use of terminology against the background of normative political theory, discourse- and content analysis of the development of terminology within different public spheres and assessing the precise socio-political implications of the terminology.