Information on press releases and publications of the department "Theoretical and Normative Foundations". 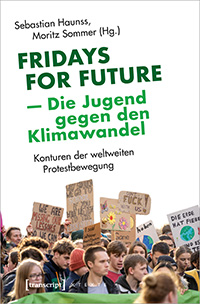 Every four years all scientists active in research in Germany are asked to elect the members of the Review Boards of the Deutsche Forschungsgemeinschaft (DFG). In this year’s election two members of SOCIUM were successful. Olaf Groh-Samberg was elected for the first time as a member for empirical social research. Frank Nullmeier was reelected as a member for political science in the Review Board for Social Sciences.

The Review Boards of the DFG are important institutions in the peer review process for applications for research funding. Potential members are recommended by universities and research institutions (Max-Planck, Leibniz, Frauenhofer etc.) but most importantly by the associations of the different research disciplines. Olaf Groh-Samberg was not only recommended by a dozen universities but also by the Deutsche Gesellschaft für Soziologie. Frank Nullmeier received support from both German political science associations, the Deutsche Vereinigung für Politikwissenschaft as well as the Deutsche Gesellschaft für Politikwissenschaft. The newly elected Review Boards will commence their work on February 2020. 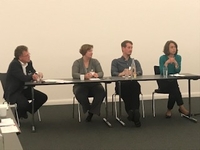 Both social as well as environmental policy research use the notion of sustainability. However, they use it in different forms and with different content. The yet only partially discernable effects of climate change, however, impress the obligation that really “sustainable” policies cannot focus only on one of the aims.

On 23 and 24 September 2019 SOCIUM together with the Forschungsinstitut für gesellschaftliche Weiterentwicklung (FGW), Düsseldorf, the IAQ Institut Arbeit und Qualifikation at the University of Duisburg-Essen, the DFG Research Group Need-Based Justice and Distribution Procedures and the Senatorischen Behörde für Soziales, Jugend, Frauen, Integration und Sport, Bremen, organized an interdisciplinary conference on sustainability in both social as well as ecological terms. In two conference days it is certainly only possible to touch on such large topics. All participants, however, deplored on the one hand the large research gaps in the overlap between social and environmental risks and crises. On the other hand, they sketched out possible next steps to close these gaps in the upcoming years.

On the evening of the first conference day a panel also discussed the situation and perspectives of the journal “Zeitschrift für Sozialreform”. A controversial debate ensued on the possible format of journals at the intersection of academia and practice as well on the question of how sustainable publishing can be organized based on internationalized social sciences but still nationally dominated social laws and policies.

On the road to valuation society?

The research network "On the Road to Valuation Society" has started its work with its first meeting on July 12th and 13th. The network assembles researchers focussing on different phenomena of valuation - from intimate valuation to peer review - to develop a theoretical perspective on valuation in society. Together with Prof. Dr. Tanja Bogusz (Kassel) and Prof. Dr. Michael Hutter (Berlin) the network  discussed "Theories of Valuation" to prepare for its further work. 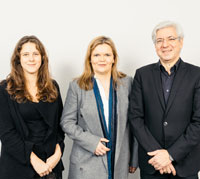 From left to right: Patricia Zauchner, Tanja Pritzlaff and Frank Nullmeier.
The German Research Foundation (DFG) has approved the continuation of the research group "Need-based justice and dIstribution procedures" (FOR 2104) for another three years.

The University of Bremen is represented by Prof. Frank Nullmeier und PD Dr. Tanja Pritzlaff-Scheele (both SOCIUM Research Center on Inequality and Social Policy) leading the subproject “Experimental studies on the stability of need-based justice in transnational contexts”. For the next three years (April 2018 to March 2021) the project will be dedicated to experimental methods, questions on global justice, political ethics of migration and a fair development policy. 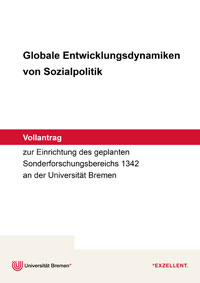 Cover application CRC 1342 "Global Dynamics of Social Policy".
The German Research Foundation (DFG) has approved a new Collaborative Research Center (CRC) at the University of Bremen. Over the next four years, the CRC will receive approximately eleven million euros.

The CRC, mainly requested by scientists from the SOCIUM Research Center on Inequality and Social Policy and the InIIS (Institute for Intercultural and International Studies) is establishing a new research network in the field of social policy research in Bremen. Thus far, this research has focused heavily on the comparison of highly industrialized countries. In the new Collaborative Research Center, the development dynamics of social policy will be analyzed in a perspective that also encompasses the global South. The CRC’s research program will go above and beyond previous social policy research in several respects. First, the program will bring international connections and networks to the forefront of research. National social policy cannot be explained solely on the basis of domestic conditions. Trade relations, migration, war, and colonialism, as well as the worldwide spread of ideas and rules of law, are of great significance for the socio-political developments of individual countries. Second, research in the CRC will be based on a broad understanding of social policy, including, among other things, education policy. Third, the CRC will replace the nation-state internal orientation of social policy research with an interdependency-centered approach.

The research network will be composed of 15 sub-projects and divided into two project areas. Project area A will consist of six sub-projects, examining the dynamics of development in various fields of social policy worldwide and developing a "Global Welfare State Information System" (WeSIS) database to cover all fields. Project area B will consist of nine sub-projects, in which case study-centered, qualitative analyses will examine causal pathways between international links and socio-political development dynamics for groups of countries.

The German Research Foundation has granted Sebastian Haunss a research project within the Priority Programme "Robust Argumentation Machines (RATIO)" (SPP 1999). Under the heading »Modeling ARgumentation DYnamics in Political Discourse (MARDY)« the project aims to develop a framework for data-driven modeling of key aspects of argumentation dynamics in policy debates.

Within the next three years Sebastian Haunss will cooperate with the two computer scientists and computer linguists Jonas Kuhn and Sebastian Padó from the Institut für Maschinelle Sprachverarbeitung at the University of Stuttgart. 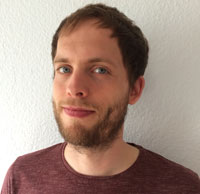 Axel Steffen has received an award by the “Deutscher Mieterbund” (German Tenants’ Association) for his M.A. dissertation in the Master program Social Policy on the topic "Soziale Wohnungsraumagenturen in Deutschland - Eine Ersterhebung" (Social Housing Agencies in Germany - An Initial Survey). On the 67th "Deutschen Mietertag" (German Tenants' Day) in Magdeburg, the DMB study prize was awarded for the second time, where Axel Steffen won the first place.

The German tenants‘ association and the Institute of Spatial Planning of the Technical University of Dortmund award this prize every two years. The award is dedicated to outstanding dissertations which deal with the research area of housing policy in an innovative way.

The Master in Social Policy offers a first-class education, on an international level, over four semesters. Objectives of the course include the development of the welfare state and civil society, the analysis of European welfare regimes, its future and the challenges they face within a globalized context as well as international comparisons. Further objectives include a close look at sub-areas and fields of social policy and onto the development and consequences of socio-political measures. The aim of the curriculum is to qualify for positions in institutions and organizations of social security as well as research institutes on welfare state- and social policy. The graduate program is aimed at students interested in professions that incorporate social scientific reflection, responsible action and research-oriented work. 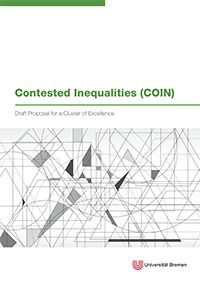 Draft Proposal for a Cluster of Excellence submitted.

In collaboration with social scientists from the InIIS, the Universities of Hamburg, Hanover, Oldenburg and Osnabrück and with Jacobs University, members of the SOCIUM have worked out a research program on "Contested Inequalities". Currently the draft proposal is being evaluated. In September 2017, the Committee of Experts will decide which initiatives will be invited to submit a full proposal.

Summary of the draft proposal:

In the 21st century, various inequalities - economic, political, ethnic, gender, age - drive the socio-political agendas of the OECD world. While these inequalities are not new, their increasing variety, cumulation, and interweavement have become a pressing and potentially dangerous issue. Inequalities shape the lives of people, and how they experience and react to them crucially affects the social cohesion and democratic legitimacy of OECD countries. The sustained or felt insecurity of large parts of the middle classes and the precarization of the lower classes are expressions of this dawning mega-problem of our times, as shown by recent populist shifts and authoritarian political "involutions" in many countries.

These troubling prospects make our Cluster of Excellence "Contested Inequalities (COIN)" ask: What follows for societal and political dynamics when the traditional dominance of economic inequalities is complemented by other kinds of inequality? More specifically, we want to know:

Urgently necessary new and better answers call for a sophisticated understanding of the settings of multi-dimensional inequalities, the practices which individuals, collective actors, and states adopt as they react to inequalities, and the intended and unintended effects of these reactions. COIN focuses on the contested nature of inequalities and the circular dynamics of interrelated responses. While in the first funding period we concentrate on countries and country comparisons, in the second period we will shift towards the international embeddedness and consequences of contested inequalities - that is to the changing qualities of international relations between OECD societies and with the Global South.

COIN builds on the strengths of the Bremen social sciences in cooperative, theory-driven, and comparative empirical research on social stratification and social policy in the OECD world. It is based on a theoretical framework tailor-made for COIN's research programme with three closely linked Research Areas (Individual, Collective, and Policy Reactions) and a Data and Methods Centre. Bremen sociologists and political scientists will work together with pertinent colleagues from other, mostly nearby, universities, and national and international cooperation partners to provide the academic community and general public with illuminating results on contested inequalities as one of the grand challenges of our times and to establish a world-class research center dedicated to this issue.