Stress and Illness through Caregiving 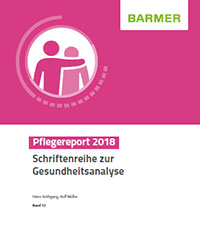 This year’s BARMER Long-Term Care Report was presented today at the Conference Centre of the Federal Press Conference Building. Its main focus this year lay on the pressures and health status of principal caregivers; but the Report also examined the effects of the most recent long-term care reforms on the provision of long-term care. The authors, Professor Dr. Heinz Rothgang and Dr. Rolf Müller, also made in-depth evaluations of case numbers, incidences, prevalences and care trajectories. The primary data basis comprised long-term care statistics for 2015, routine data provided by the BARMER and a survey of 1,862 BARMER insurees conducted especially for this Report.

The switch from care levels to care grades as of 1 January 2017 brought with it changes in the criteria determining rights of access to insurance benefits. Cognitive disabilities are now defined as a constituent of the eligibility rulesfor  insurance benefits, and respective access barriers have been reduced. The switch from care levels to care grades has also led to a significant increase in favourable assessments. According to projections based on BARMER figures, the number of long-term care dependents increased by 17.9 % between 2015 and 2017. Around 13 percentage points are attributable to the increase in Care Levels 1 and 2.

Most Long-Term Care Dependents are Cared for by Relatives

As a rule, the principal caregiver has to carry out numerous tasks (e.g. apply medication, give assistance at mealtimes, give mobility support or toilet assistance). Six out of ten principal caregives would like further support in at least one of eleven areas of responsibility. In addition to this general deficit, there are problems when it comes to finding substitutes. Significantly more than half of respondents have no opportunity to find anyone who will stand in for them when they need a break.

Frequently, caregivers do not avail of services offered because they are too expensive or suspected of being poor quality, because there are no services available, or because the organisational effort is too high. It becomes apparent that the needs of caregivers cannot be fulfilled because of the structure of the services offered or because they require too much effort. This is the case for around 378,000 principal caregivers (15.3 %) in daycare, 188,000 (7.6 %) in care services, 437,000 (17.7 %) in short-term care and 379,000 principal caregivers (15.3 %) in low-threshold care and domestic help.

In terms of coping, 87.5% of principal caregivers claim that they can cope most or all of the time. Nevertheless, a large percentage (38.0 %) do not get enough sleep; 29.9% feel trapped in their role as principal caregiver; one in five (20.4 %) often find carework too strenuous; 22.7% of caregivers find that long-term care has a negative effect on friendships, and one in five (18.8%) has existential anxiety or fear of the future.

Caregiving relatives not only suffer from higher morbidity, they also suffer greater morbidity through their carework. At 48.7% in December 2017, the prevalence of mental illness among principal caregivers is very high. In a comparative population in terms of age structure and gender, only 42.5 % of non-caregivers is similarly diagnosed. Morbidity among principal carers has increased by 9.1 percent points over the last five years and only 5.7 percent points in the comparative group.

Projections from the survey of BARMER insurees in 2018 suggest that in total at least 185,000 principal caregivers are on the verge of giving up long-term carework. In addition, over a million principal caregivers only want to continue providing long-term care as long as the situation prevailing at the time of the survey does not change. As, the care situation does tend to deteriorate over time, however, it cannot be assumed that this group of carers will continue to provide long-term care. All in all, then, the situation is quite alarming.

Principal caregivers would like less red tape when submitting applications, would like to be able to always contact the same expert on specific matters, would like to be better informed about long-term care insurance benefits and services and about where help can be sought. It is of prime importance to people in need of care to know where they can get help. Clearly, there is a need for the central actors in long-term care and in politics to redress the situation.