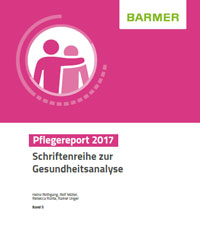 Barmer-Pflegereport 2017
Authors from the SOCIUM Research Center on Inequality and Social Policy at the University of Bremen present the BARMER Long-Term Care Report 2017.

The 2017 BARMER Long-Term Care Report was presented to the public today at the  Conference Centre in the Federal Press Conference Building in Berlin. The special focus for this year is the diversity of needs and care situations among young people (aged 0-59) in need of long-term care. The authors also examined the effects of the more recent long-term care reforms on the provision of long-term care (LTC). The authors, all members of SOCIUM at the University of Bremen, headed by Professor Heinz Rothgang and including Dr. Rolf Müller, Rebecca Runte und Dr. Rainer Unger, also presented more detailed studies on numbers of LTC insurance beneficiaries, incidence and prevalance rates and LTC trajectories. The data base for the report comprises primarily long-term care statistics for around 2.6 m. people in need of care, the German Socio-Economic Panel Study and routine insurance data from BARMER as well as a survey among young BARMER insurees in need of long-term care carried out especially for this report.

Higher and more benefits lead also to an increase in the number of beneficiaries
The number of people in need of care has increased not only demographically, but also because of the broadened range and higher amounts of LTC insurance benefits, as more people than before have undergone an LTC assessment to test their eligibility for the new or enhanced benefits. At the same time, there is a downward trend in the prevalence of higher levels of LTC.

The need for long-term care also occurs very frequently among younger people
The need for long-term care not only affects older people. Of the 2.86 m. people documented in the LTC statistics for 2015 as requiring Care Levels I-III, 386,000 (13.5%) were under 60 years of age. Their care needs differ from those of older people in a number of ways. While the overwhelming majority of people in need of LTC are female, the opposite is true of younger care dependents. Thus, among the latter, in 2015, "only" 175,000 people in need of LTC were female, but there were 211,000 male care dependents aged 59 years and under.

Young people in need of LTC have different conditions and disabilities
Often, older people in need of long-term care are associated with conditions such as dementia and strokes. By contrast, younger people in need of long-term care are found to have a range of other conditions and disorders. Thirty-five percent of younger people in need of LTC are paralysed, 32% have impaired intelligence, 24% have epilepsy, 22% have developmental disabilities and 10% have Down's syndrome. Dementia and strokes occur much more seldom in young care dependents. Their lower age in connection with this disease spectrum leads to a higher survival rate and a higher rate of exit from LTC dependency.
Altogether, 89% of young care dependents have a degree of disability high enough to entitle them to benefits enabling participation in employment (in accordance with § 33 of the German Social Code, Book IX) and participation in community life (§ 55, ibid.). Especially for younger care dependents, coordinated cooperation between the different funding bodies is therefore crucial.

The desire for self-determined living arrangements often remains unfulfilled
Young LTC dependents often express a wish to live in group residences, supervised shared housing arrangements, their own homes or assisted living facilities for people with handicaps. There is a lack of such housing, however. Satisfaction with their living situation is highest among those who live alone (93%) and with partners (91%); it is lowest among those living in residential homes (63%). There is frequently a desire to change their present living situation. About 35% of 10-29-year-olds would like to move into residential groups or supervised shared accommodation. About half of them cannot find a suitable offer.